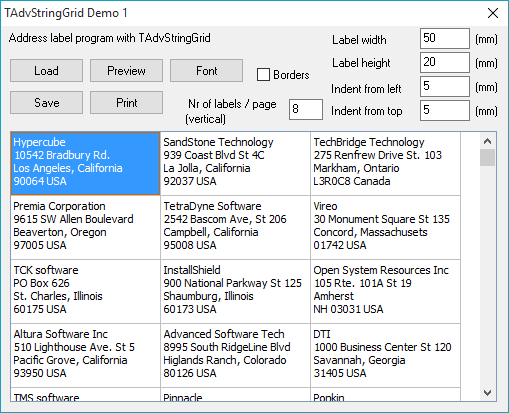 In the first example project, an address label printing application is constructed. It shows the capabilities to specify cell sizes for printing as well as a technique to make a quick preview page. Therefore, a form with TAdvStringGrid is used and addresses are loaded into the cells. The addresses are loaded from a file (adres.tbl) which is a format TAdvStringGrid can use. To display more than one line of the address, the grid is set into multiline cell mode by setting MultiLineCells to true. Editing is turned on in Options through setting goEditing to true. Adding multiple lines when editing in the cell is done by pressing Ctrl-Enter at the end of each line. Loading and saving the addresses is attached to two buttons, the load and save button and the code :


The next step is to show the output either on the previewscreen or on paper. As the previewscreen requires an extra form, this is explained first. The TAdvStringGrid component has a method PrintPreview with 2 parameters : a canvas and the rectangle in which to display the preview. To provide a canvas for the preview, a PaintBox is choosen. This PaintBox is placed with alClient alignment on a form. As the intention is to let the grid paint its preview on the PaintBox canvas during the OnPaint event, a reference to the grid is needed in the form that holds the PaintBox. The form is declared in the following way :

A reference to the grid is used in the constructor, so that the form can simply let the grid display its preview during the OnPaint event handler of the PaintBox component. The constructor is :

while the OnPaint event handler is :

To show the preview is just simply showing this form :

To printing the grid to paper can be done by just calling its Print method. Since nothing has been done yet about the size of the labels that will be printed, some properties need to be explained to control sizes of cells. Normally, the grid autosizes cells to the smallest box around the cell text. This is done to fit as many cells on a sheet of paper as possible. To print the labels, we need to overrule this default behaviour. First, the position of the left and topmost label is specified with the PrintSettings.LeftSize and PrintSettings.HeaderSize properties. All dimensions in the PrintSettings property are in 1/10 of mm. So, to specify that the first label is positioned 1 inch from the top of the page, the HeaderSize property needs to be 254. Then, the automatically calculated minimum cell height needs to be overruled by using the FixedRowHeight and UseFixedRowHeight properties. If UseFixedRowHeight is true, the dimension (again in 1/10mm) in FixedRowHeight is used instead of the automatic calculated value. Now, all labels will have height FixedRowHeight. The same is true for columns with the FixedColWidth and UseFixedColWidth property. However, this demo uses a slightly different method to set the column size, as this method allows to specify different sizes of each column. TAdvStringGrid has an event to specify this :

The parameter of the event is the column in aCol and the current automatic calculated width. It's up to the application now to decide if it is required to overrule this calculated value or not. Here, it's supposed that all labels have the same width, so the value is taken from the edit control where the width is specified in mm. Since the width parameter is also specified in 1/10mm, a multiplication by 10 is required. The other settings are just a matter of setting the properties :

With the current setup, it's easy to print for example 8x3 labels on a single page. Suppose that addresses are available for multiple pages then the maximum number of labels per page (in vertical direction) should be set in most cases. It's easy to extend the application to make sure not more rows are printed per page than the number of labels available on the page. This is done through the PrintNewPage event handler. This event handler is called after printing each row and queries the application to start a new page if needed. The code here forces a new page after the number of rows equals the number of labels (in vertical direction) on the paper :

The number of labels is converted from the edit control text to an integer, and the equation (arow mod i=0) makes sure that every i rows, a new page is started. And that concludes the simple addresslabel printing application. With TAdvStringGrid it takes less than 30 lines of code you need to write yourself. You can download this example application here and experiment for yourself.